A couple of weeks ago I picked up an Acer Revo on the cheap as a replacement for my old behemoth of a HTPC. The Revo is a “nettop” with netbook parts in a slimline case not much bigger than many routers currently on the market. 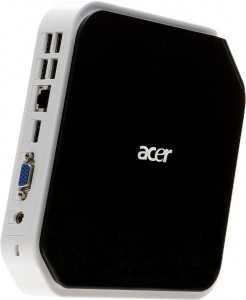 I picked up the basic version with 1GB RAM, and a single core Atom N230 running at 1.6Ghz running Acer’s custom Linux install. The kicker was the inclusion of the Nvidia Ion chipset which includes a Geforce 9400 on-board, sufficient for accelerating pretty much any HD content you want to throw at it. In use its practically silent, using a 2.5” laptop hard disk and small active fan which throttles down during use.

First thing I did was to get Windows 7 on there to see how it would handle and I was pretty impressed with the experience. I left the Aero theme enabled as it seemed to perform better than running the Basic theme. Standby and hibernate works much better and quicker than my old HTPC. To get the best out of it for my HTPC related tasks I did the following:

If you have a 5.1 amp which supports DTS and Dolby Digital and want to get your content pumping out multi-channel audio in MPC-HC (should the content provide either a DTS or Dolby Digital stream) then you’ll need to do a small amount of configuration:

Additionally, if you want a complete front end without navigating the Windows desktop, Boxee might be worth a look into as it also supports GPU acceleration both on the interface and during video playback. It’s also available for Ubuntu and supports the Ion chipset out of the box for accelerated video, for a free alternative. This is based on the very popular Xbox Media Center (XBMC) which also supports VDPAU (Linux’s implementation of DXVA).

Got any other tips? Feel free to share them in the comments :)